A while ago I submitted an idea to some bittorrent-client developers that would very much improve the world. The biggest problem currently facing bittorrent users is the lack of seeds for many torrents out there. These torrents are called ‘dead’ because of that. In reality they’re not dead, they’re just not being seeded anymore, there are no peers in the swarm seeding the data. This problem only exists because the client-software has chosen to (automatically) stop seeding the torrents in question, making it a short term medium. 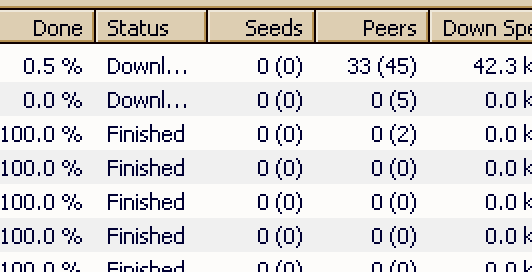 Many users have huge lists of torrents ready to be fed to the swarms, torrents that are doing nothing but sit there (on disk), disconnected from optional peers. This, I think, is ridiculously stupid, and caused by silly seeding conditions. It makes a lot of users angry or disappointed. So, instead of having those seeding conditions based on (maximum) ratio, or based on (maximum) seeding time, it is much smarter to seed when there are few or no seeds (left) in the swarm. Have the client detect that by scraping the tracker!

For example, when a user would queue all his/her finished torrent-downloads, a client like µTorrent should only seed the ones for which there are no more seeds left, torrents with a set amount of seeds, like 2 or less. And as a secondary condition, it should only seed those torrents for which actual downloading peers are detected within a set time, like 14 days.

A feature like this would save the torrent world so much misery, and consequently save the Internet huge amounts of wasted traffic, and therefore save a lot of spilled energy. If only because good and functional torrents naturally stay seeded much longer, more likely than fake or bad torrents. That way if a very old torrent is still seeded, it means it must be good stuff, and one can select and choose accordingly.

It is now years later, yet still no bittorrent client has implemented such a feature. Most of them use the highly overrated ‘ratio’, while in real life bandwidth is no longer an issue on the net. What is important is the availability through seeds and peers. And patience.

By pushing this into the search-engines, perhaps some developer wakes up!