Disregarding what country or people or leader someone decided to hate and boycott;
Is it suddenly considered acceptable behavior to then be completely banning all media coming from such a country, without even asking for a vote from any of us here in The Netherlands? How is this even remotely possible in 2022? I vividly remember how, only 2 decades ago, we were all strongly fighting, even with lawsuits, against censoring/blocking internet access to scientology websites, bittorrent sites, hacker manuals online, ISIS beheading websites, Islam hating movies and comics etc. You just do not mess with the freedom of expression online. That was the credo everywhere.
The excuse I hear and read is that this country and its leader have done such horrible things that this alone warrants everything someone in some powerful position decides to do against this country and its people. Are you kidding me? Who are these people in powerful positions to decide any of this? Without even asking us, the population, about any of this? Without even PROVING any of their claims against this nation, its people, its leader?

Just an FYI about the claim that Russia ‘wants to be a new empire’ and how ‘we’ need to be scared of Putin (even though they have never even remotely expressed any desire to expand or become some kind of world-power):

Ooh, we must be so scared of Russia and China!
Besides, if China or Russia did not have nuclear weapons, the US/NATO would have Yugoslavianized it a long time ago. Let’s not forget that *the reason* the USSR started making nuclear weapons in the late 1950s was solely because of the US having dropped nukes on Hiroshima and Nagasaki in 1945 without proper (military) motive.

I used to believe we, as a species, were progressing, slowly evolving towards smarter, healthier, more sane, less violent, less aggressive decision making processes, considering human rights etc. Apparently I was wrong. We’re back in the dark ages, where ‘kings’ of the ‘free West’ decide what its people are allowed to hear or read, where Russians are the new black sheep, the new jews, the lesser humans, who we can treat like animals without ever listening to what they have to say, or worse, who are not allowed to participate in our meetings or discussions, and not allowed to travel around. Their bank-accounts may be plundered for our king’s benefit. Have you all gone insane?

What is a dictator, by the way? Ursula Von Der Lying sure behaves like one, as far as I can tell. We haven’t voted for her, and she explains why she thinks Putin is evil, completely disregarding the opinion of the people. Isn’t she responsible for illegally sanctioning Russia, censoring our free internet access to hear/read/see what the other side has to say about the so-called unprovoked aggression, ruining our twitter, YouTube, facebook, experiences, cancelling Russian art, tourism, stealing their bank-deposits? Seriously, WHO is behaving like an actual dictator here? Not Putin, that’s for sure. Nordstream was a good energy solution/deal between Germany (Europe, essentially) and Russia. Europe together with Russia and Asia would thrive. We wouldn’t need that annoying island of insane warmongering politicians across the Atlantic at all. THAT is what the US is afraid of, Europe agreeing with Russia, Asia and Africa, and losing its world domination over resources we ALL have a right to be using!

The US tells us we’re so free and we have all these press freedoms and journalists don’t get killed etc. How ‘free’ are you when you incarcerate the most humans per capita? The most of the world, even. Who are these prisoners? Journalists? ‘Dictators’ of ‘bad actor’ nations? Dissident voices? Protestors? Activists?; 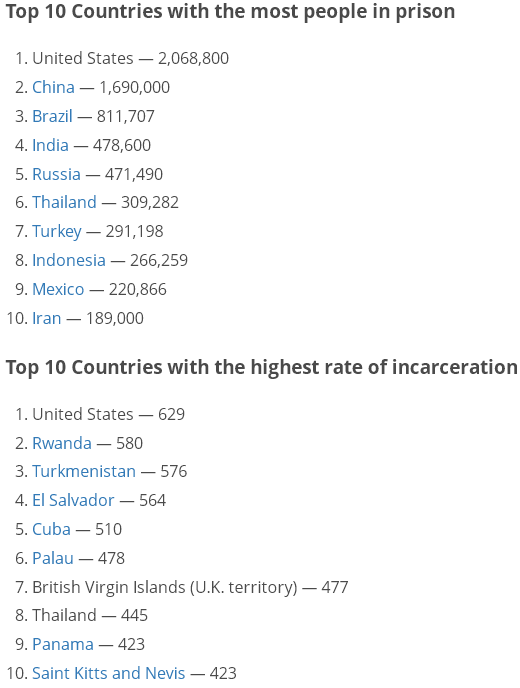 YouTube (of all) accidentally(?) proposed this video to me and I do agree with what Caleb Maupin is saying here;
Where’s the outrage over this WW3 attempt in Poland? And no research into the supposed Russian missile that caused the Ukrainians to make a mistake? If you look at the map, there’s not even a way to fire at a Russian air-missile and then mistakenly have the response end up in that spot in Poland. Even military experts will tell you that. I give up. It’s your funeral.