The main point of contention seems to be the concept of the ‘indivisibility of security’ in Europe. Russia often points to the 1999 OSCE Charter for European Security, which says that each country “has an equal right to security,” and countries “will not strengthen their security at the expense of the security of other states.” This formula was affirmed in the OSCE’s declaration at the 2010 summit in Astana (now Nur-Sultan), Kazakhstan. Russia says that this means NATO and the US cannot expand their military infrastructure eastward without Russia’s consent. Which, in handshakes, was also promised to Gorbachev way back in the 90s.

Washington said it was ready to discuss “Russia’s interpretations” of indivisibility of security. This caveat stems from NATO’s insistence that it is a purely defensive alliance that does not pose any threat to Russia, contrary to what Russia itself says.
In a letter to the US and its allies, Russian Foreign Minister Sergey Lavrov accused Western countries of ignoring the concept of indivisibility of security altogether in favor of cherry-picking “elements that suit them” from international documents, namely those guaranteeing the freedom of individual states to choose their alliances. He highlighted that the West’s written responses demonstrated “serious differences” in the understanding of the issue. Speaking on Russian TV, Lavrov argued that it was “difficult” to view NATO as a defensive alliance, considering its interventions in Yugoslavia, Afghanistan and Libya. 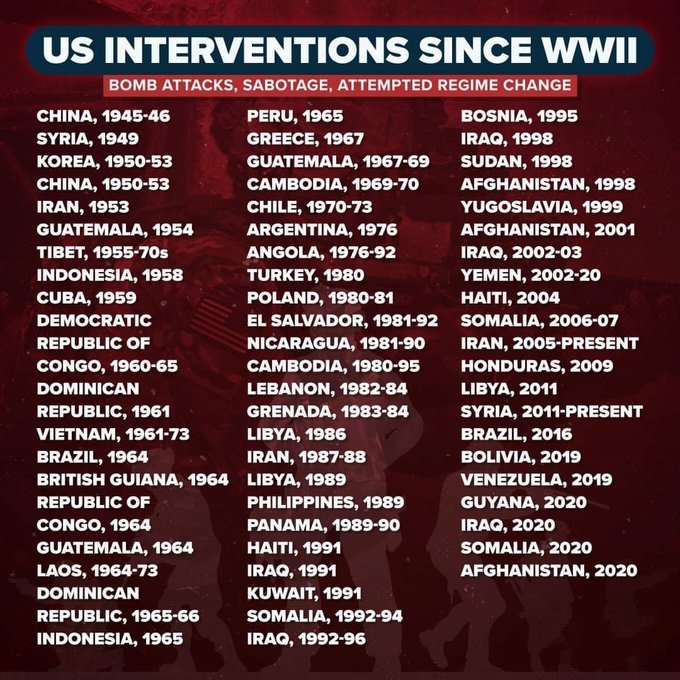 NATO presented a laundry list of demands, including the withdrawal of Russian forces from Georgia, Moldova, and Ukraine, which implies that Moscow must return Crimea to Kiev. The citizen of Crimea, like those in the DonBass region, and in Odessa, who are majority Russian speaking, by a huge majority voted to be(come) Russian, rather than Ukrainian. Russia therefore repeatedly stated that Crimea’s reunification with the country in 2014 is irreversible.

It is unlikely that Russia will remove its peacekeepers from Moldova’s breakaway Transnistria region, where they have been stationed since the early 1990s, until the frozen conflict there is resolved. It is similarly hard to see Russian peacekeepers being removed from Abkhazia and South Ossetia, whose independence from Georgia was recognized by Russia in 2008. The US has allegedly written it stands ready to talk about “reciprocal commitments” not to deploy offensive ground-launched missile systems and permanent combat troops in Ukraine, which also implies that Russia must abandon Crimea. Which is constitutionally impossible, under amendments voted on in 2020.

Russia’s demand for NATO to publicly abandon its so-called ‘open-door policy’ of accepting new member states seems equally unrealistic at this point, after the US and NATO reaffirmed the right of any country to seek membership in the bloc.

As early as February 16 2022, Joe Biden knew that the Ukrainians had begun firing shells (containers full of explosives) at the civilian population of Donbass, putting Vladimir Putin in front of a difficult choice: Help Donbass militarily and create an international problem, or stand by and watch the Russian-speaking people of Donbass being crushed (again). The OSCE has monitored the bombing (and thus ceasefire violations) by Ukraine carefully; 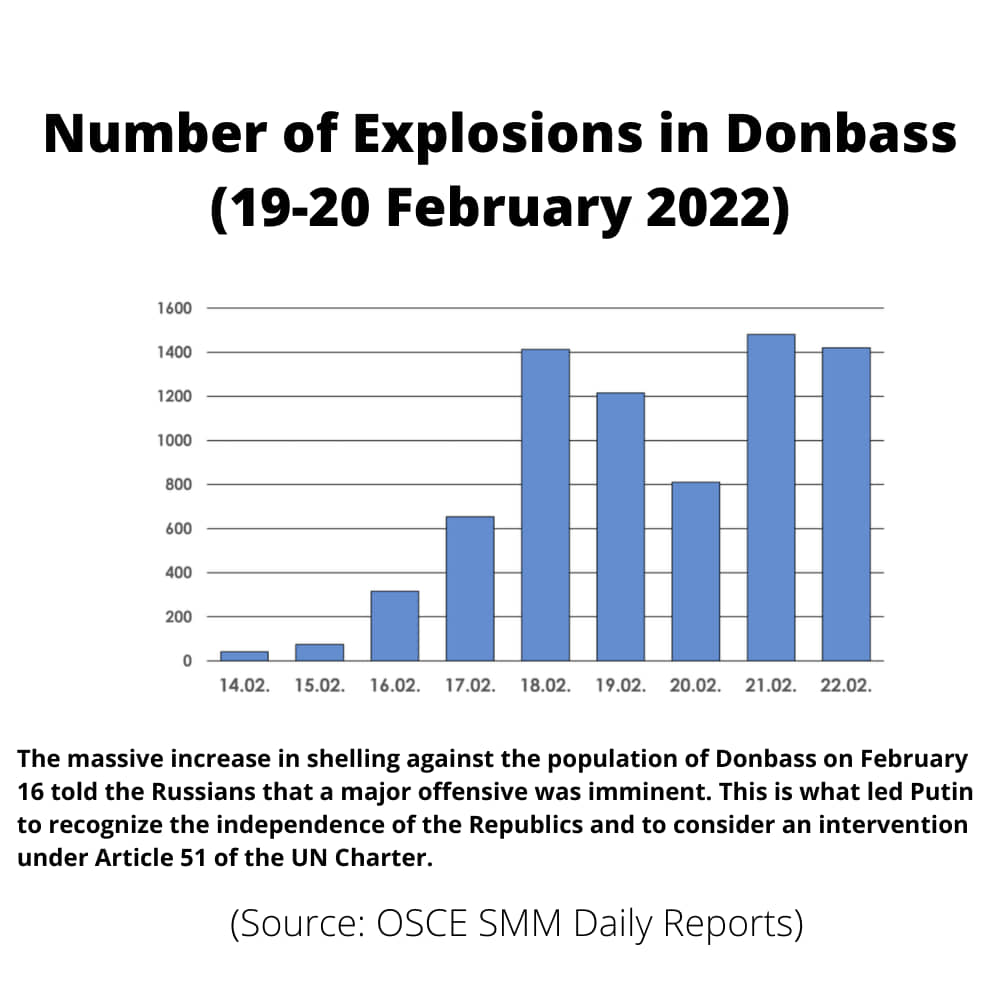 If Putin would decide to intervene, Putin could invoke the international obligation of “Responsibility To Protect” (R2P). But he knew that whatever its nature or scale, the intervention would trigger a storm of sanctions. Therefore, whether Russian intervention was limited to the Donbass or went further to put pressure on the West for the status of Ukraine, the price to pay would be the same. This is what he explained in his speech on February 21. On that day, he agreed to the request of the Duma and recognized the independence of the two Donbass Republics and, at the same time, he signed friendship and assistance treaties with them.

The illegal Ukrainian artillery bombardment of the Donbass population continued, and, on February 23, the two Republics asked for military assistance from Russia. On February 24, Putin invoked Article 51 of the United Nations Charter, which provides for mutual military assistance in the framework of a defensive alliance. 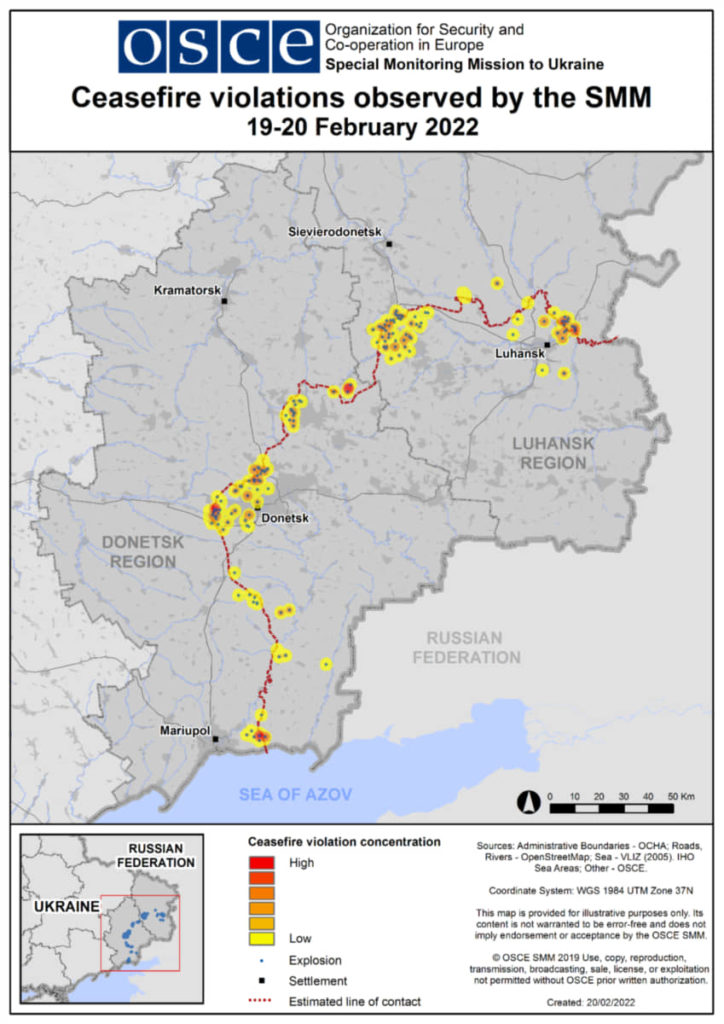 In order to make the Russian intervention illegal in the eyes of the public, NATO deliberately hid the fact that this war actually started on February 16. The Ukrainian army was preparing to attack the Donbass (once more) as early as 2021, as Russian and European intelligence services were well aware. All this is documented by these intelligence services and factually irrefutable. Time will tell, but I think future jurists will judge this military operation to have been a fully legal undertaking.. 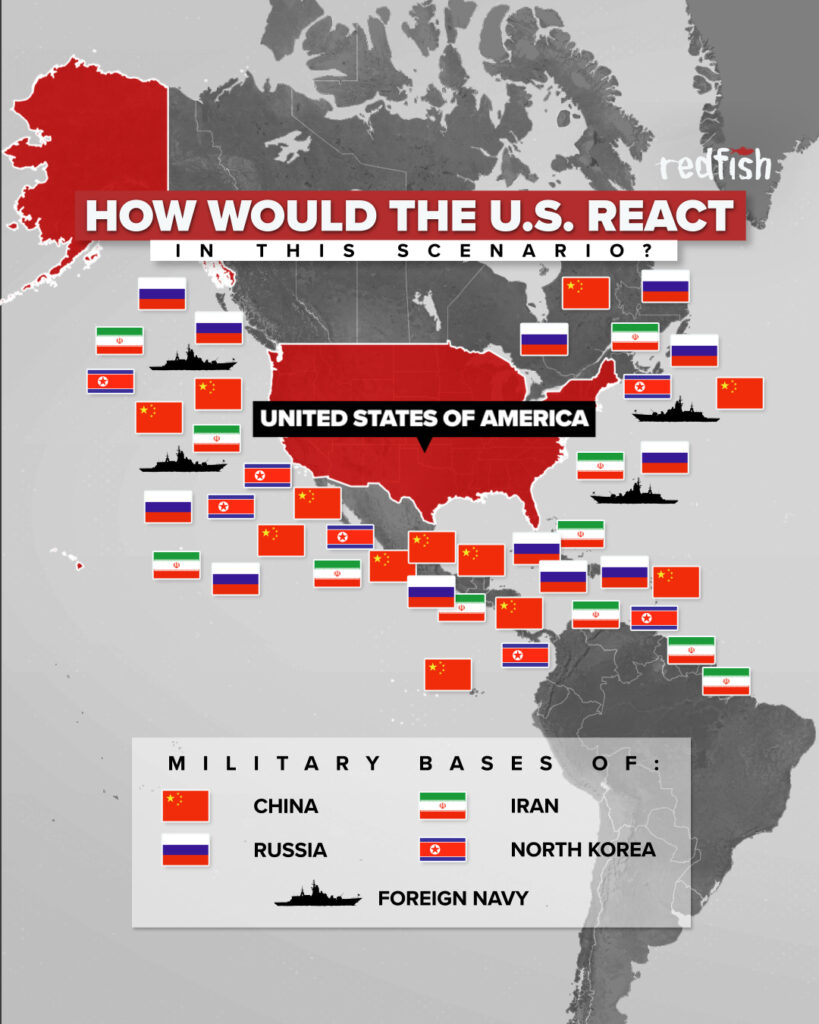 Still, one wonders what changed in the media’s eyes from before 2022: 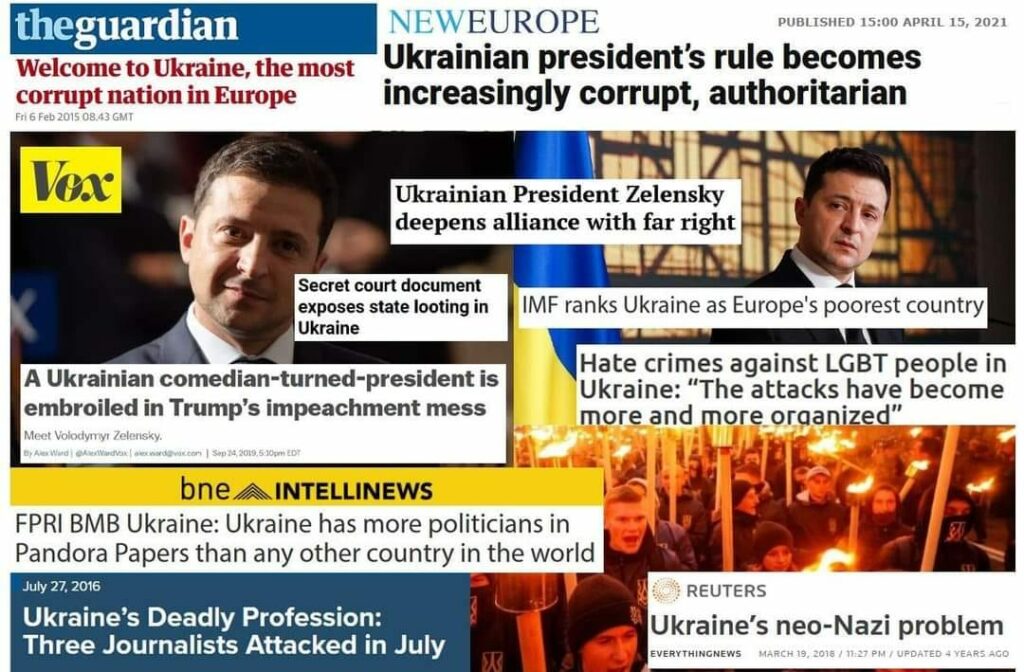 * Note that all info provided above can be found on the websites, reports and press memo’s of the OSCE Special Monitoring Mission, the UN, NATO, Whitehouse/Pentagon and the Russian Federation’s Ministry of Foreign Affairs. Either side has confirmed validity of the other side’s statements. It’s not ‘propaganda’. Just sayin’..

Twitter is banning the following URLs (shadow-banning):
https://www.brighteon.com/channels/pursuitoftruth
https://journal-neo.org/2020/09/18/natos-slow-motion-blitzkrieg-eastward/
https://ukr-leaks.org/en/News
If you try post them anyway, they make it look like a technical problem; you get to see bullshit like “too many failed login attempts” or similar fake reasons. All lies of course, twitter is clearly #censoring and #banning information the US State affiliated twitter does not want you to know about.. Note that inside Russia, you can still freely access ALL Western media, unlike what many Western media try to make of press freedom in Russia.